How often do you get to give the first performance of a brand new piece of music? At Border Spring Music Days, we have a composer-in-residence. Our composers-in-residence have written many extremely cool pieces over the years. What will the composer write for the 2022 Camp? Nobody knows … you'll have to wait till you get to here!

Who is the composer-in-residence this year? 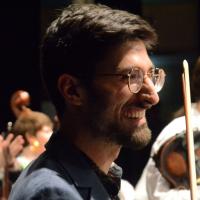 Andrew Aronowicz. He’s from Melbourne and has been composer-in-residence at Border Music Camp for four years. He has worked with a number of major Australian ensembles and performers including the Melbourne, Tasmanian and Sydney Symphony Orchestras, as well as Syzygy Ensemble and Arts Centre Melbourne, among others. He was recently announced as one of the composers in the SSO's prestigious Fifty Fanfares program. His music has been performed in concerts and festivals around the world, including in the Metropolis, SoundSCAPE and Darmstadt festivals. In 2016, Andrew’s orchestral work Strange Alchemy was chosen as the Australian Under-30 entry in the 2016 International Rostrum of Composers. In 2019, his song cycle The Abbotsford Mysteries, a setting of poetry by Australian poet Patricia Sykes, was premiered by contralto Liane Keegan and Plexus Ensemble to great acclaim. Andrew is also a passionate teacher, writer and speaker about classical music, and produces radio full-time at ABC Classic.

What do people say about it?

'He is really creative!! His music sounds awesome!'

'Pieces are hard but really cool ... I've learnt lots of things I didn't know violins could do'

What does the Australian Music Centre say about it?

The Composer-in-Residence program won the 2005 Australian Music Centre / APRA Award for the Most Distinguished Contribution to the Advancement of Australian music in a Regional Area.

What else has Andrew written?